In 1936, Charles and Lillian Richter moved into a small, elegant modernist house in Pasadena. It had windows up to ceiling height, which may have given their neighbours some unexpected views. For the Richters had become ardent nudists. A year earlier, in 1935, they had joined the Fraternity Elysia, located in the Los Angeles Hills on a 250-acre estate near Lake Elsinore and run by Hobart and Lura Glassey and their business partner Pete McConville. (The earth moved for him – Times Online. Report by Christopher Hudson – From The Sunday Times, October 29, 2006)

Glassey v. State, 1947. “The facts of the case are as follows: Police officers using false names appeared at the entrance of the Fraternity Elysia, a property bounded on three sides by uninhabited hills, paid the customary visitor’s fee, and signed a registration form acknowledging acceptance of nudism as a wellspring or fountain-head of moral and health benefits. Observing a number of nude men, women, and children engaged in activities such as badminton, swimming, and sunbathing, the officers arrested a man and a woman who were acting as managers and charged them with violating an ordinance proscribing operation of facilities patronized by three or more nude persons not of the same sex. (Two nude badminton players not of the same sex would have been acceptable, it seems.) A municipal court found both guilty and the judge imposed sentences of 90 and 180 days for McConville and Glassey. The Supreme Court ruled that the appellants had not demonstrated that the ordinance unduly restricted personal liberties. The original decision stood.”

Social justice would consist in the balance between freedom and law, between rights and the duties which would affect what individuals got in the way of increased values and rights they also rendered back in the way of increased service to society. I suppose, in a general way, anyone who admitted there was any ethics to the question at all would have to admit that it would have to be found in some such equation between benefits received from society and benefits conferred to society. (John Dewey, Lectures on Ethics, 1900 – 1901)

Some Australian visitor to Berlin has mentioned that during a week’s stay in the German capital he hasn’t seen a cop. The only officer he managed to find was a parking inspector. From the article appeared in Culture column of Deutsche Welle, Germany’s international broadcaster, the reader may learn that there is not many police or surveillance cameras in Berlin compared to other major cities. According to the article, England has some 4.2 million surveillance cameras – equating to one for every 14 people – and most can be found in London, while in Berlin such cameras barely exist, and not because the government can’t afford them. It seems that the locals do what they want – within limits, of course – practicing a strange sort of self-governance.

People freely drink alcohol on the streets and in the subway, successfully carry on “illegal” parties in public parks, get nude in said parks, smoke dope wherever they like, sell food and drink without a license, or open unauthorized bars in their apartments, seemingly with the tacit acceptance of the law.

Someone may be dismayed by all this liberty. It’s as if the people can be trusted.

A quiet read in the sun By canonsnapper | Flickr - Photo Sharing!

P.S. One Flickr member commented on the photo: “… Can someone sunbathe stark naked in Berlin? In what seems to be a public park? Without getting arrested? This is extraordinary…” Another answered: “This is BERLIN!”

Is there anything common between naturism and thermodynamics? Maren Möhring, the author of Working Out the Body’s Boundaries: Physiological, Aesthetic, and Psychic Dimensions of the Skin in German Nudism, 1890-1930 (in Body parts: critical explorations in corporeality, edited by Christopher E. Forth, Ivan Crozier, p. 229-246), argues in favor of the existence of close links between naturism (at least, German naturism) and what she calls thermodynamic theories of energy. Referring to The Human Motor by Anson Rabinbach and multiple naturist sources, she affirms that in the nineteenth and early twentieth centuries the body

was conceptualized as a thermodynamic machine haunted continuously by the threat of exhaustion. Within a thermodynamic universe fixated on energy conservation, the importance of the skin was based on its capacity to absorb the rays of the sun and thus to energize the body. The nudists believed that the “electricity of the sun,” the “beneficial, invigorating and refreshing ultraviolet rays,” would restore the body`s energy supply. It has not yet been noticed in the literature on nudism that society‘s growing acceptance of sunbathing might be connected to this energetic imperative.

Dr. Maren Möhring asserts that nudists considered not only sun-bathing, but also “artificial” electric light baths, and even X-rays (X-rays bath? I don’t think that someone tried it) as healthy and revitalizing for the body. Even sunburn was not able to frighten nudists of that time. It was considered a “health enforcing” phenomenon because it “hardened the skin” and allowed new skin to emerge after the burned skin had peeled away. From that point of view even the tiniest piece of clothing could disturb this energizing process, so the slogan: “Fight the bathing trunks! Fight any kind of bathing costume!” was put forward.

Well, it was interesting to read about the modern scientization of the body, but I could not find in the article any assumptions (accepted by early nudists) about the physical mechanism that could be behind the above-mentioned thermodynamical skin’s capacity to absorb the rays of the sun and to revitalize the body. The simple fact that skin can hardly be considered as the principal organ responsible for power supply of the human body makes this thermodynamical theory hanging in midair. I think that even the pioneers of nudism didn’t underestimate the importance of nutrition and didn’t try to live on sun rays.

What was the greatest threat for the civilized world in the 1930s? You would be mistaken, if you think about nazism. Actually, it was nudism, at least for someone.

‘Three hundred thousand men, women, and children, in America alone, are nudists,’ informs Edwin Teale in the article which appeared in the POPULAR SCIENCE MONTHLY, February, 1938 (pp. 70-71, 126). The author of the article, entitled Science studies the Nudists, points out that the followers of the “back-to-Eden” cult report that, during one ten-month period, members increased at the rate of 10,000 a month. And now America is facing as many as 400 camps, scattered from coast to coast maintained by the faddists for nude sun bathing.

The author presumably decided to cut the ground from under the nudist movement and asked: ‘Does nakedness really benefit health? Are the claims of the nudists justified?’ Then he slightly reformulated the question: ‘Can our bodies, if given a chance, inure themselves to cold and inclement weather?’ It was implied that the enthusiasts of the new cult, beyond all doubt, would give a positive answer.

Fortunately, two New York research workers, Dr. Eugene F. DuBois and Dr. James D. Hardy, were already able to give a real scientific answer to the question. In the 1930s they have concluded a long series of tests at the Russell Sage Institute of Pathology to determine how the body regulates its temperature. These heroic men of science spent hours, with clothes removed, sealed in the copper vault of a supersensitive, $10,000 heat-measuring chamber called a clinical calorimeter. Edwin Teale was deeply impressed by this immense apparatus running ice water and high-resistance electric wires balance heat and cold, at the will of an operator. Here is an extract from his article:

During the DuBois-Hardy tests, the scientists have tackled such problems as how the nude body reacts to different temperatures, how efficient human flesh is as an insulating medium, when shivering begins, and whether a fat man can withstand cold better than a thin one. They remained nude in the sealed chamber of the calorimeter at temperatures that ranged from ninety-six to seventy-two degrees Fahrenheit.

1. Human flesh is as efficient as an insulating medium against cold as is paper, leather, asbestos, or cork.
2. There is only a small difference between fat and thin persons in their ability to withstand cold for long periods.
3. A quiet subject, without the protection of clothing, will begin to shiver at a surprisingly high temperature, eighty-three degrees Fahrenheit (28° Celsius), approximately ten degrees higher than the average room temperature in a furnace-heated home.

The researchers thus provided a scientific basis for judging some of the claims of nudism.

Without the protection of clothing, the motionless human system is constitutionally unfitted to cope with cold. Only in lands where the temperature never drops below eighty-three degrees, can nudists live in comfort.

“For physical reasons, if for no others, man seems destined to continue as the animal that wears clothes,” concluded the author of the article from the 1930s. Nudism was doomed. And who would disagree with that?

I think my place of residence obliges me to write a few words about local clothing optional beaches. So I’ve decided to explore how Kiev and its beaches are presented on the internet.

I’ve started from the Wikipedia article on Kiev:

Kiev is located on both sides of the Dnieper River, which flows south through the city towards the Black Sea…
The city boasts of 16 developed beaches (totalling 140 hectares) and 35 near-water recreational areas (covering more than 1000 hectares). Many are used for pleasure and recreation… Kiev has a continental humid climate… The warmest months are June, July, and August, with mean temperatures of 13.8 to 24.8 °C (57 to 77 °F)…”

List of social nudity places in Europe for recreation and List of Clothing Optional Beaches (World Beach List) include both Kiev naturist beaches identifing them as being either an official or unofficial clothing optional beach with common nude use,

By the water by Vadim aka t-maker | Flickr – Photo Sharing!

Surfing the internet, one can easily find a map (see, for instance, Panoramio or Wikimapia) or even a detailed guide how to get to these beaches.

When you go down the stairs of Hidropark metro station, turn right, walk through the food stalls and over the bridge. As you cross the bridge, on your left-hand side you will see a beach in the distance running parallel to the bridge. That’s your destination. Head left after the bridge. When you hit sand, you’ll see bunch of rowboats that will ferry you across to the beach for 5 hyr (look for the crowd standing by the water’s edge). Once you’re on the other side, the beach gets nuder the further north you walk. There’s a way to access the beach by bridge from Podil but it’s a couple of kilometers and requires a bike. There’s also a nude beach north of Hidropark in Obolon where I hear the water is cleaner. (Thorn Tree travel forum)

Despite the variety of sand river beaches, including two almost official nudist beaches, Kiev can hardly be called a great place for nude sunbathing. Local newspapers mention “cigarette butts in dirty sand”, voyeurs, and even crowds of drunken idiots. Foreign visitors write about women of various sizes and ages and tragic-comical in the Slavic soul (TheTravelrag.com). 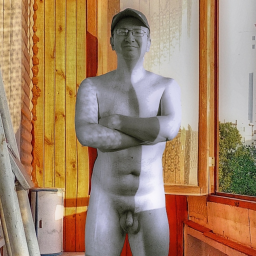